Another view of the colorful harbor at Tobermory

The children’s program Balamory was filmed here, a live-action television series on BBC for pre-schoolers, based on fictional island community of Balamory, but filmed ,lately in Tobermory, filmed between 2002 and 2005. The theme song is What’s the story in Balamory? With a shot of dolphins diving alongside the ferry. Another song is which Coloured House are we going to? It seems some of the houses were painted one color for show, have gone back to original color now. There is also a famous Tobermory cat; I’m bringing evidence back to Candace, who is minding Blaise, the rectory cat. Maybe Blaise could have her own book?
Tobermory is a storybook kind of place, with 700 full-time residents. The name comes from the Gaelic tobar-mhoire which translates as Mary’s Well, after an ancient holy well dedicated to the Virgin Mary in what is now the upper part of the village. 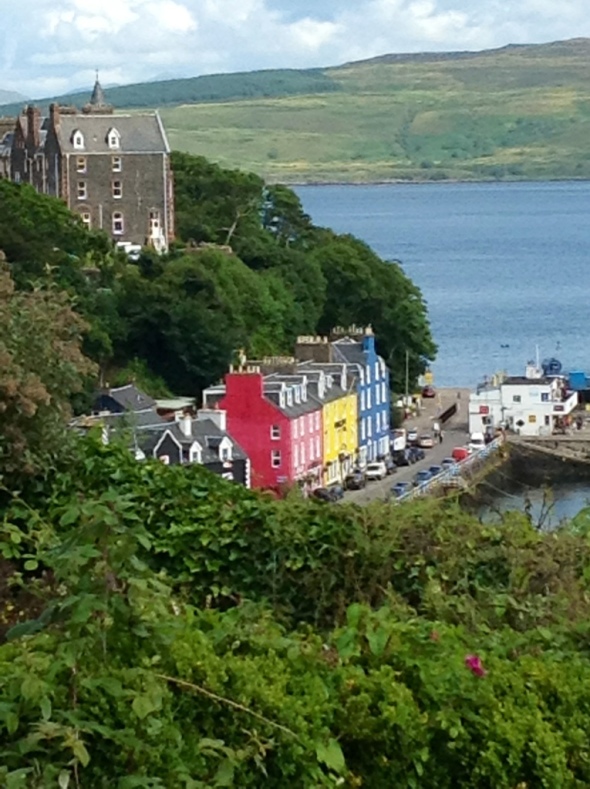 16 Aug This entry was published on August 16, 2013 at 8:30 am and is filed under Uncategorized. Bookmark the permalink. Follow any comments here with the RSS feed for this post.

Older: We are now in Tobermory, town on north end of island of Mull.
Newer: Looking down church spire to harbor below